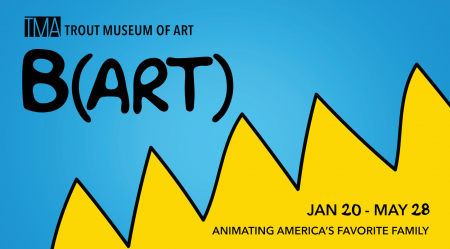 B(ART) is an unauthorized and in-depth look at the talent that created America’s longest-running primetime animated sitcom. Set in the fictional town of Springfield, the show explores the life of a working-class family through parodies of American culture and society, television, and the human condition.

The exhibit displays the art of creating hand-drawn 2D animation. Artists used sheets of transparent plastic called cels, drawing an outline on the front side and color blocks on the backside. These cels were then placed over a background and photographed in sequence. When played back at a speed of 24 frames per second, they create the illusion of movement. The TV show's production used cel animation during seasons 1 - 13 (1989 - 2002). Since season 14 (2003), the show embraced advancements in technology and uses a digital system, which eliminates the need for cels and the hand-painted process.

The Trout Museum of Art